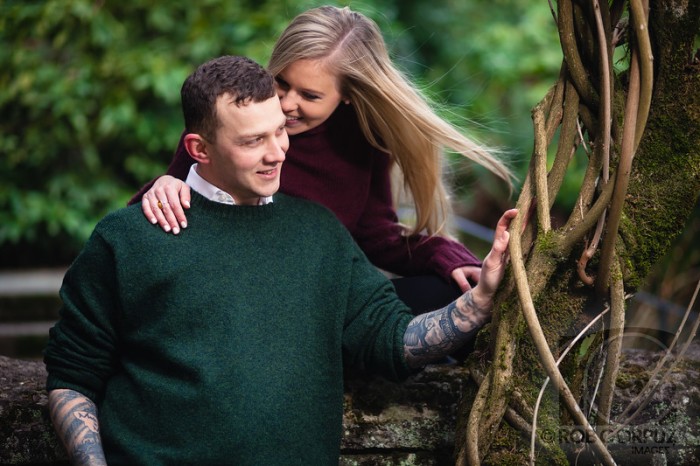 Congratulations! Whether it’s because your soulmate just popped the question, or you have an anniversary coming up, or you’re looking for that perfect gift for your better half, a photo shoot is a perfect way to celebrate!  If you’re engaged, you’ll definitely want some amazing photos to commemorate the occasion and for your save-the-date cards for the upcoming wedding.

And even if you’re just dating or already married, a love story photo shoot is a fantastic way to spend time together and express your love for each other.  Regardless, you’ll definitely want to look your best, so here are some tips on what to wear for your shoot:

1. YOU’RE THE STARS, NOT YOUR CLOTHES. 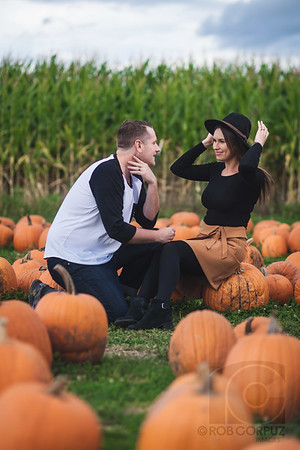 It’s no accident that I chose to make this rule #1. Your clothes should help you shine, but not outshine you. In other words, they shouldn’t be a distraction. We want your lovely faces and your undying love for each other to be the very first things that viewers see when they look at your photos.

We don’t want them to immediately think about where they can buy your jacket, or worse, that your jacket doesn’t fit you and would still be hideous even if it did.

Your clothes help to tell your story, but they shouldn’t be the story. For example, extremely bright colors, busy patterns, and exaggerated silhouettes can sometimes steal too much of the viewer’s attention from what they should be focusing on: you.

This isn’t a fashion shoot. Everything you’re wearing should support you, make you look good and feel confident, but you and your partner should still be the primary subjects of each photo. 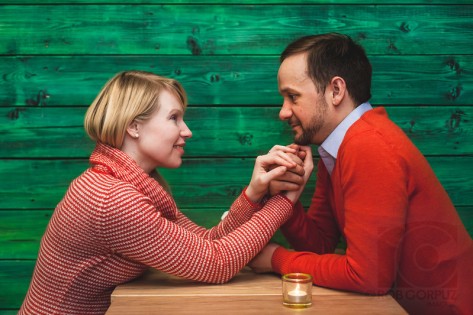 You two are a couple, and you definitely want to have your respective styles reenforce that idea visually, so it’s a good idea to have the various elements of your clothes work together rather than clash completely.

We’ll get more into the details of what works throughout this list, but for now, here are a couple of quick examples of things that you probably want to avoid:

If your two outfits together contain all seven of the official colors of the rainbow (or six, if you’re anti-indigo), you’re probably wearing too many colors, which will be distracting, and not cohesive enough.

If one of you is wearing a fancy ballgown, the other probably shouldn’t be wearing a baseball cap, because you’d be too far apart on the scale of formal to casual. If one of you is a biker who exclusively wears black clothes made out of leather and kevlar that could stop a bullet, and the other is a ballerina, and you want to dress that way for your shoot… you know what? That actually sounds pretty awesome. I’d totally photograph that.

But there is definitely a danger that having so much conceptual contrast could overshadow you, thus violating rule #1. Unless you know what you’re doing, play it safe and make sure your clothes complement each other.

When I say “complement,” I’m not saying that you should match exactly. The verb “complement” means “add to (something) in a way that enhances or improves it.” Yes, you’re a couple, and you’ve made the amazing commitment to share your lives for life. But you’re still separate individuals, with separate identities, and if you dress exactly alike it generally just looks… weird.

Sports teams dress in nearly identical uniforms to make sure everybody knows whom to throw the ball to. Retail store employees wear uniforms so that customers know whom to ask questions to.

Unless you’re terrified that strangers won’t immediately know you are a couple with just one glance, I’d advise against the two of you wearing the exact same patterns or shades of colors.

No matter how much you love a particular garment, if it doesn’t fit you well, it’s better to leave it at home. There are lots of subtleties to good fit, but it generally means wearing clothes that hug or follow the lines of your body, but don’t squeeze. Some clothes are meant to be snug (leggings, skinny jeans) but if you’re struggling to get it buttoned or zipped, that discomfort will most likely show up in the photos.

If you’re self-conscious about being heavier than you want to be, trying to hide behind baggy clothing will just make the problem worse, particularly in still photos, where there is no motion to distract the viewers’ eyes.

And if you’re rail-thin and trying to look bulkier, baggy clothes will just make you look like you had to borrow them from somebody wiser and more mature. If something doesn’t skim the lines of your body, there should be a good reason for it, like a skirt or dress that drapes and billows out beautifully in the wind, or a touch of padding in the shoulders of a man’s sport coat that enhances the appearance of a V-shaped torso.

Ladies, I’d recommend going for outfits that cinch in at the waist, even if baggy silhouettes are trending. Even if you can rock them in real life, in still photos you’ll end up looking shapeless. 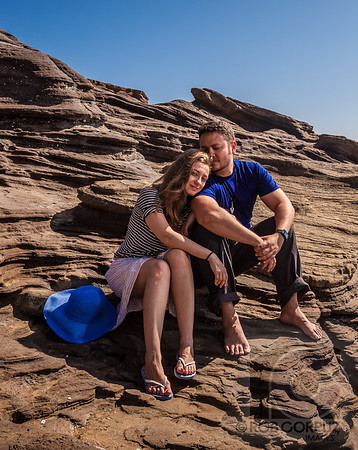 Your clothes should make sense in terms of the environment you’re shooting in, or artfully contrast with it.  Getting dressed up in cocktail attire could totally work if you’re going to shoot at that swanky venue where you first met, and it could also look amazingly surreal out in a natural environment, but stilettos in the jungle will probably just look silly.

Think about using the colors of your clothes to help you pop out from the background a bit. You probably don’t want to camouflage yourselves so that you look like floating heads.

If you’re going to be shooting outside, as many couples often prefer, and there’s going to be a lot of green trees and grass, a warm color like red, burgundy, or orange will help keep you from blending in too much.

If you’re going to be on the beach, a nice shade of blue will contrast with the sand but also reflect any blues in the water and sky. On the other hand, if you’re self-conscious about certain parts of your body looking larger or smaller than you’d prefer, it might be a good idea to wear something that does blend in with the environment.

6. PREPARE FOR THE WEATHER. 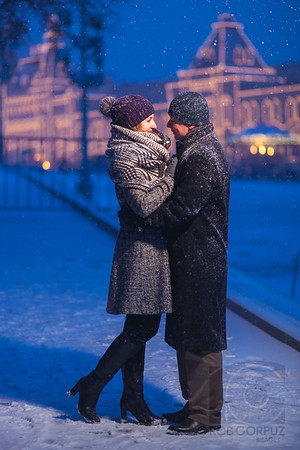 This one seems pretty self-explanatory, but even though I’ve photographed couples in places that are famous for their challenging weather (Moscow, London, Iceland, and where I live now in Portland, Oregon), I still find that people often underestimate the effect that inclement weather can have during a photoshoot.

For better or worse, these days we humans generally spend the vast majority of our lives indoors in controlled climates. It’s not unusual for us to go straight from home to car to office to car to home, spending barely a minute outdoors in an entire day.

Even if you are an outdoorsy type, I’ll bet your ceiling-less time is often spent either working or walking. In other words, if you want to take some of your engagement photos outside, as most people do, be prepared to stand still for a while.

If it’s cold and there’s a chance of rain or snow, layer up accordingly. Even if the weather is above freezing, you’d be surprised how cold your toes can get if you’re standing outside for an hour two rather than just walking for five minutes from one warm box to another. You probably don’t want all of your engagement photos to show you buried under a big bundle of clothes, but bring a thick, warm coat and a big fluffy scarf that you can take off while shooting and put back on while your photographer is adjusting the lights or switching lenses. Avoid cotton for anything that’s against your skin in the cold, as if it gets wet, it loses any ability to insulate you. A cool umbrella, along with protecting you from the rain, also doubles as a great prop.

If it’s hot and sunny outside, don’t forget to put on sunscreen before you leave the house and bring a hat and sunglasses, but be prepared to take them off while your photographer is shooting. You don’t want your beautiful windows-to-the-soul to be hidden behind a pair of shades or under the shadow of a brim.

Stay tuned for Part II of this post, where we’ll delve into color theory, the casual-formal scale, why you should never wear logos, and more. To make sure you don’t miss it, click the “FOLLOW” button below to subscribe, and please contact me if you’re interested in booking a session (I’m based in Portland, but happy to travel!) or just want to say hi!   What have you worn in past engagement or couples shoots?   Feel free to share photos and thoughts in the comments below!

Follow ROB CORPUZ BLOG: Behind the Eye of a Photographer on WordPress.com